Over the years we have completed excavation Clinton MO projects encompassing varying types of projects. When it comes to site work we are capable of doing all of what is needed for new construction or any other type of excavation in Clinton Missouri you need. 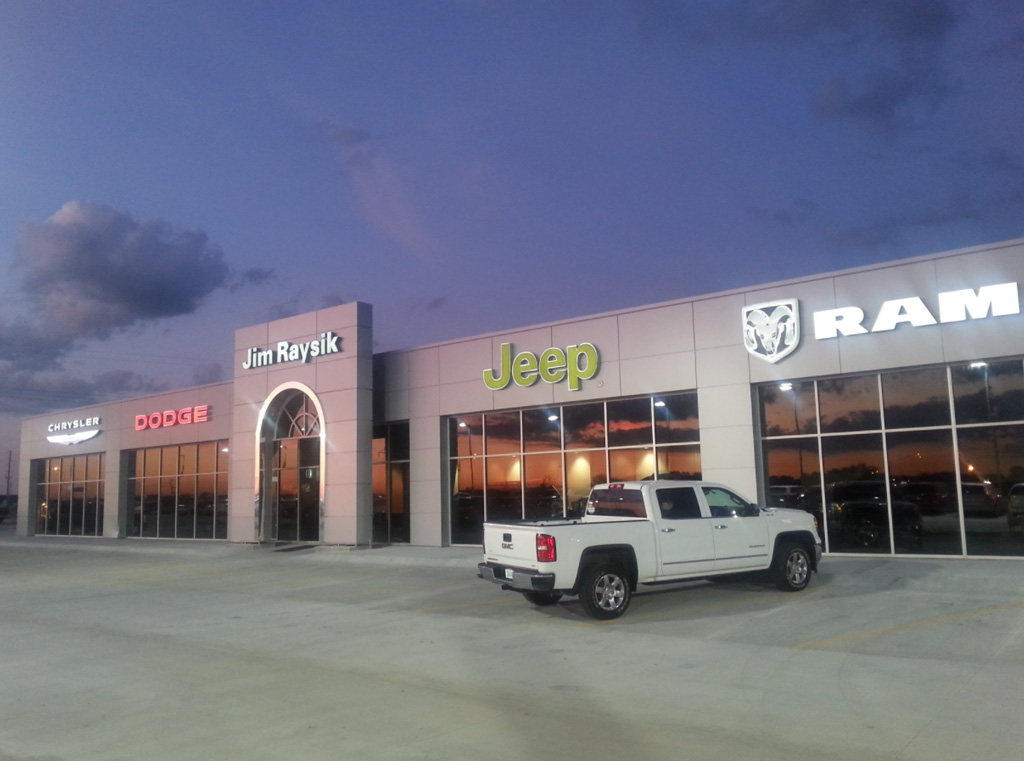 In 2014 we did the excavation on the new Jim Raysik Dealership in Clinton Mo. We excavated 10,000 yards of topsoil and clay to get to the final grade. The mounds that the dealership uses to display their trucks, and jeeps are constructed of the extra material from the excavation of the parking lot and building pad. For the storm water system, we excavated a retention pond and installed a weir with a series of steel culverts to control the amount of water that could flow out during a big rain. On the berm of the pond we built a road, so it also serves the purpose of displaying the new inventory of the dealership. It was a pleasure to work on this project and to work for Jim Raysik on his premium dealership. The best dealership in Clinton Mo, now has a premium location and spectacular display mounds, with a beautiful new building. The environmentally friendly design of the dealership with its dual-purpose storm water control system is just icing on the cake.

That same year we installed a new sewer main along vansant road for the very same development that the dealership is in. This line amounted to thirteen hundred feet of eight inch sewer main with manholes. Some of this line required digging seventeen feet deep. 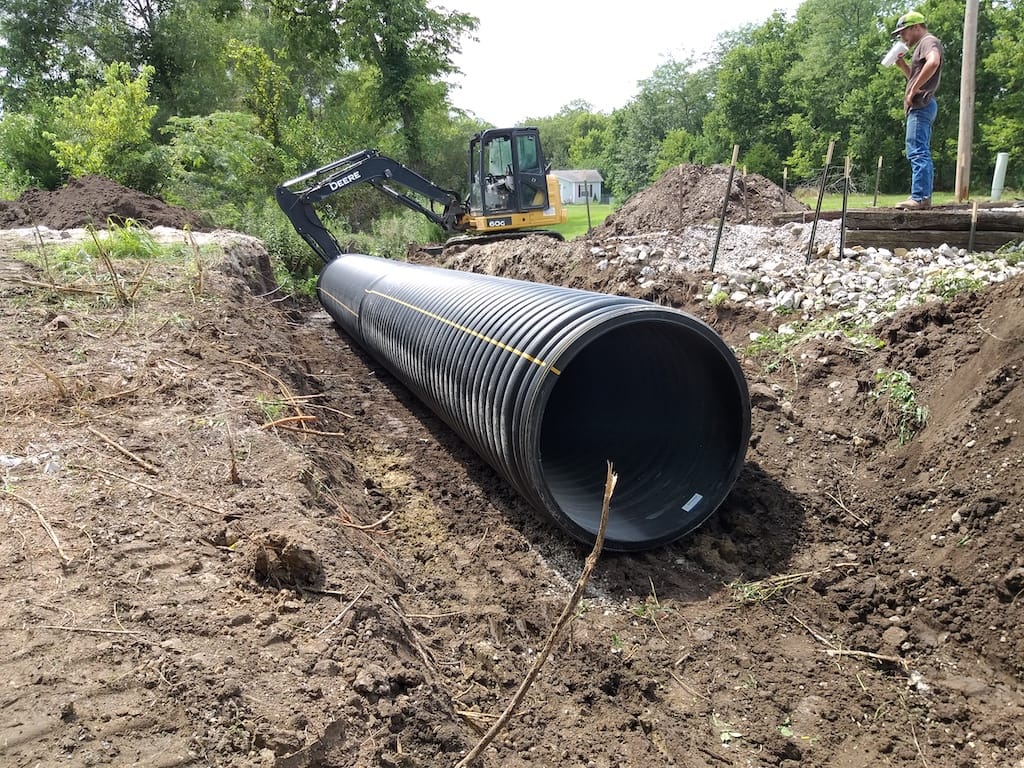 This Project is excavation Clinton MO consisting of building a pad for a 30,00 Square foot pad for the new cabinet shop building. We had to move 12,000 yards of soil and bring in 3,000 tons of screenings to create a low volume exchange layer under the building to help prevent movement of the subgrade so the concrete won’t crack or cause structural damage over time.

On this project we have done much more than just the excavation Clinton MO. Ultimately he has had us do all the utilities also. One of these is the 800 feet of four inch conduit that included a bore under the road so the power line could be run to the new transformer on his site. This was necessary due to the need for three phase power to run his equipment.

The fire line that we installed for this site was a six inch C-900. We had to live tap a twelve inch main line that was too close to the road to do a bore so we cut the road to install the line. This was made more difficult due to the fact that there is a company in the industrial park that is past this site that runs twenty four hours a day with trucks coming in and out all the time. To get across the road we had to cross the road in such a manner that half of it was open soon after cutting across the road. The line then had to be dropped down using forty five degree mechanical fittings and then back up the same way to get under a wide and deep drainage swale that is between the road and the parking lot for the building. The domestic water was installed beside the fire line using the same ditch where we cut across the road.

Installing the sewer line was interesting also since there is a low area with a ditch running through it that prevented us from installing a gravity line while staying in the ground. To keep from installing a very expensive lift station that would require lots of maintenance costing over time even more, we installed a steel casing to bridge the low area with the gravity line running through it. While this was expensive it was even in the short term less expensive than the alternative. Also a much more reliable option.

When it comes to excavation Clinton MO we are a one stop shop, having a great deal of experience in many aspects of the site work for new construction and expansion of existing sites. 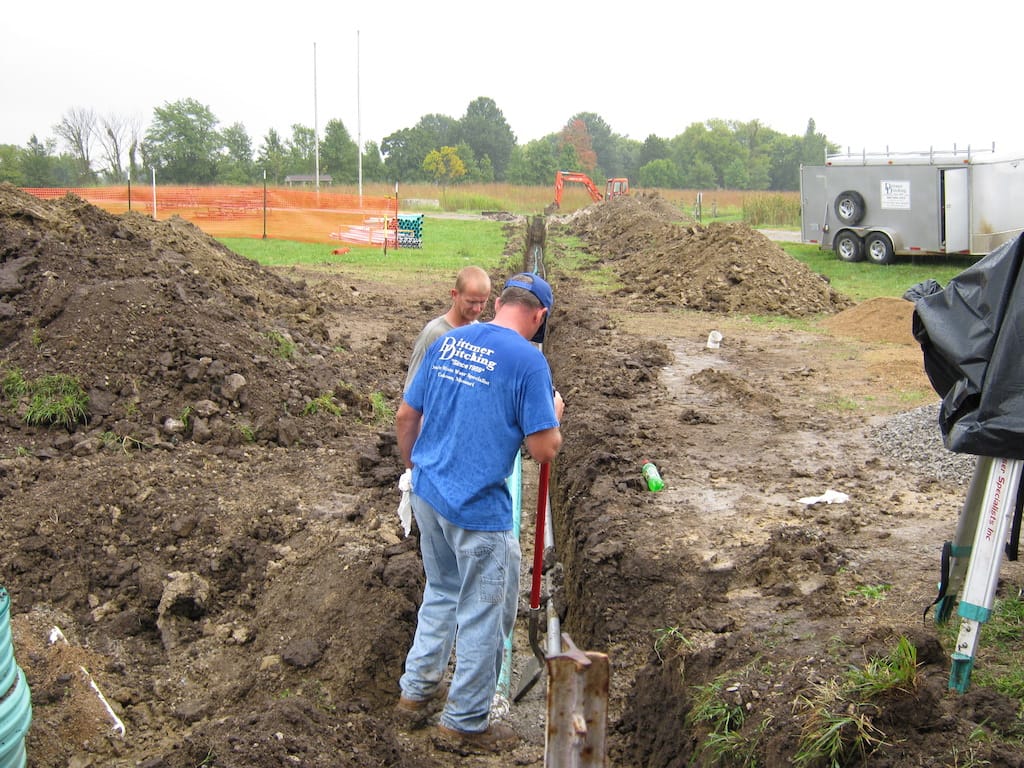 This excavation Clinton MO project had been abandoned when a new owner, the bank that had loaned the money for the project. To recover the investment the new owner of the bank set out to finish the project. The sewer system had been partially completed. With a new design to deal with existing conditions from the incomplete project we set out to complete it.

We had to demo the incomplete recirc tank due to it having floated and since it was a cast in place tank it had to be demoed. We constructed a fifteen thousand gallon pump tank to bring the sewage from one half of the duplexes and repaired shoddy work to the piping for that section. We constructed a twenty thousand gallon tank built in place to serve the purpose of being used as the recirculating sand filter tank, this also required installing all the equipment in it. We built a forty by eighty recirculating sand filter bed with concrete walls. A chlorination and dechlorination system was also a part of this contract.

There were also many different small spot repairs that had to be done in order to complete the excavation in Clinton Missouri.